The meaning of the name of Oeyeondo(Oeyeon Island) indicates that it is too far from the earth and it looks as if it is covered by the smoke. Oeyeondo is 53km away from the Daecheon Port. You can meet this island when you have get on board a ship for 2 hours. However, you cannot see Oeyeondo easily, even though you almost arrive at this island. Oeyeondo is very mysterious. Just like its name, Oeyeondo has been enveloped in a sea fog frequently. You sometimes feel as if Oeyeondo rises up suddenly. The scale of the island is just 2 hundred thousand pyong. Three mountains from the sea directly get joined together at the boundary of the sea, which makes beautiful scenery and it makes the visitors evoke a sigh of admiration.

This island is the farthest from Boryeong City among 70 islands or so. People have named it Oeyeonyeoldo, as if the island leads the rest of islands.

Ten odd years ago, the fisheries were very developed and it was easy to see the seasonal fish markets in this island. At present, there are 140 households around the estuary. It has been said that Jeonhwoing General settled down here with his followers at BC 202, when Je Kingdom perished and Han Kingdom was established.

That's why people in the island hold a ceremony to Je General every year and pray for a good haul. They believe that the woman and the baby would be safe when the woman delivery the baby if the spirit of Je General is a help to them.

[The present state of Pungeodangnori]

[The contents of this celbration]

There has been an ancestral shrine of Jeonhwoing General in the Dangsan Camellia Forest (Natural Monument No. 136) beyond the village since the middle age of Choseon Dynasty (approximately 300 years ago). People in the island have prayed for peace and a good haul. This ceremony is to assure the harmony of people in the island with Yonghwang Je.

※ Jeonwhoing General was a younger brother of Je Kingdom emperor and he was swept by the ship and settled down on Oeyeondo with his 500 followers when Je Kingdom perished and Han Kingdom was established. The first king of Han Kingdom wanted him to be a subject, however he rejected this proposal and died himself. His 500 followers also died themselves. This impressed people in the island and they built up an ancestral shrine for him and his followers and held a ceremony for them.

From Dangsan to Norangbae passing through Keunmyeonggeum, a wooden deck (2 kilometers) is established, and eco-friendly direction boards with brief explanations are erected at each scenic viewpoint. In addition, mountaineering trails are established on Bonghwasan Mountain (279 meter) and Mangjaesan Mountain (171 meter). At the top of the mountains, the panoramic view of the Eoyeon Archipelago Islands, which encompasses 15 islands, spreads out at a glance.
▶ Oeyeon port → whale genitals(Goraejoji) → Big myeongeum → Norangbae 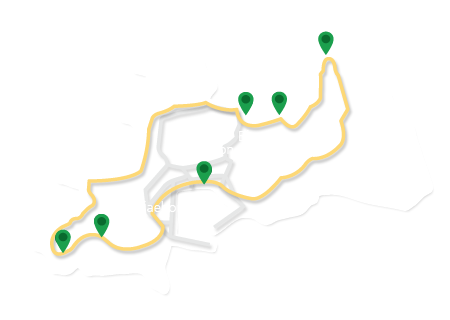